Here are a couple of images from a group exhibition I was involved in which was based on a four day sketching event related to places around the north side of the city.
All of the works are connected in some way to Ulysses and are currently on display at the Olivier Cornet gallery.

Since the exhibition opening I have begun to work up a more stylized image based on the Sirens episode of Ulysses which I started drawing while we were situated opposite the Ormonde hotel where the action in the book takes place.There is a black and white line drawing version of the same image in the exhibition.

I have coloured this one on the computer but I will eventually do a painted version. Likewise with the Duglacz butcher’s scene, where Bloom goes to buy a kidney for his breakfast. 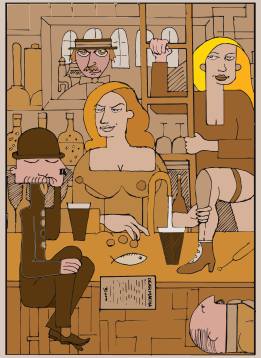 The third image shows my notebook in the background, the Buddha depicted is now in Collin’s Barracks and is mentioned in Ulysses. The photograph  is linked from the gallery facebook page.